Posted on January 10, 2014 by itooktheredpill

Give the majority of the credit and/or blame for the economy to the party which holds majority control (2+ out of 3) of the House, Senate, and Presidency.

Over those 144 consecutive months, the average Employment-Population ratio was 63.3%.

Even though President Bush had truly “inherited” the Dot Com Bust and the 9/11/2001 attacks which were a “double whammy” to our economy, the 2003 Bush Tax Cuts turned the economy around… after those tax cuts, employment (and tax revenues) went up each year, so much so that by December 2006, the last of those 144 consecutive months that Republicans controlled the House, Senate, and Presidency, the Employment-Population Ratio was slightly above that 12 year average, coming in at 63.4%.

THAT is what (then-Senator) Obama and his fellow Democrats “inherited” from Bush and the outgoing Republican majority on January 3, 2007!

The new Democrat majority inherited a good economy and a shrinking deficit:

(And of course, the Democrats want to foolishly raise the minimum wage AGAIN now, to over $10/hr!)

The Democrat majority drove the Employment-Population Ratio down under 59%, where it has stayed for OVER FOUR YEARS. That hasn’t happened since the mid 70′s… more than a generation ago, and when less women were in the workforce.

Things are worse now than they were under Carter. Much worse.

If we had 63.4% employment today (like we had in December 2006 under Bush and the Republican Congress), instead of 58.6% (like it was in November 2013), then 4.8% more of our population would be employed. How many people does that represent?

If we had the same 63.4% level of employment now that we had during December 2006 (the last month of a Republican House, Republican Senate, and President Bush), then well over 11.8 Million more Americans would be employed right now!

Anyone who thinks that the last 4 years of Obamsa’s 5 years in the White House have been a “recovery” needs to consider this: 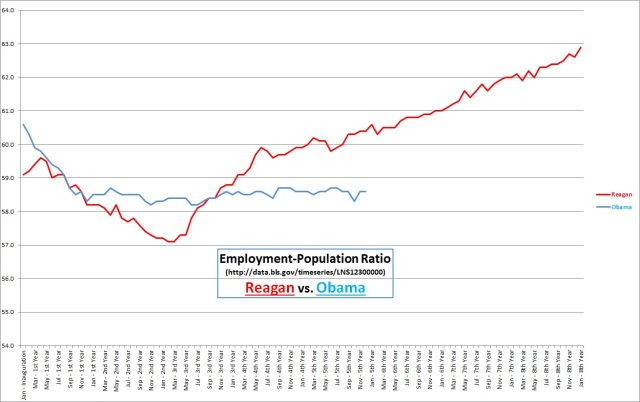 4) Barack Obama’s third and fourth years as U.S. Senator were as part of the majority party which drove budgets and economic policy, and drove the Employment-Population Ratio down to 60.6% the month Obama was inaugurated. So, one can’t honestly say that Obama had nothing to do with what he “inherited”. Obama played a very direct role in the multiple minimum wage hikes and record-breaking deficits of FY 2008 and FY 2009. Obama played a very direct role in the subprime mortgage crisis. Senator Obama topped the list of per year receipts of Fannie Mae and Freddie Mac Campaign Contributions.

6) From there, things got worse for Reagan, while they levelled out for Obama.