OK, Speaker Pelosi, How Did the DNC Certify Obama’s Eligibility?

Posted on January 5, 2009 by itooktheredpill

Nancy Pelosi and the DNC sent an Official Certification of Nomination to the Secretary of State in each of the 50 states.  Most of those certifications merely certified that Obama and Biden had been nominated.  Hawaii is different.  Hawaii requires that the party ALSO certify that the nominees are legally qualified, under the provisions of the United States Constitution, to serve in those offices.

Here is what Nancy Pelosi and the DNC sent to the Hawaiian Secretary of State: 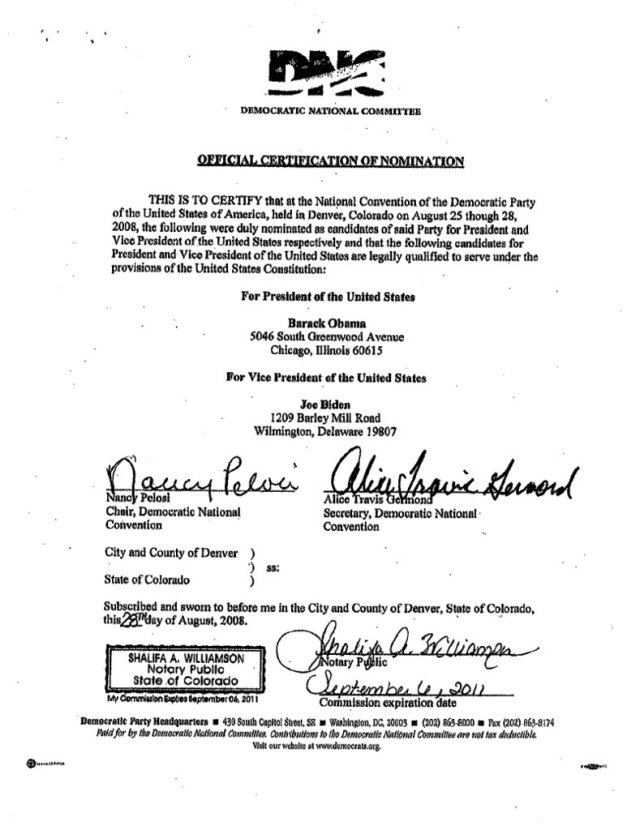 OK, Speaker Pelosi, How Did the DNC Certify Obama’s Eligibility?

The Constitution requires that Obama be a natural born citizen:

No person except a natural born Citizen, or a Citizen of the United States, at the time of the Adoption of this Constitution, shall be eligible to the Office of President;

The 1787 signers of the Constitution understood “natural born Citizen” as it was described in the 1758 book:

… natural-born citizens, are those born in the country, of parents who are citizens. … children naturally follow the condition of their fathers, and succeed to all their rights. … The country of the fathers is therefore that of the children … in order to be of the country, it is necessary that a person be born of a father who is a citizen; for, if he is born there of a foreigner, it will be only the place of his birth, and not his country.

§ 215. Children of citizens born in a foreign country.

It is asked whether the children born of citizens in a foreign country are citizens? The laws have decided this question in several countries, and their regulations must be followed.(59) By the law of nature alone, children follow the condition of their fathers, and enter into all their rights (§ 212); the place of birth produces no change in this particular …

Barack Hussein Obama II’s own campaign admits this at http://www.fightthesmears.com/articles/5/birthcertificate

As a Kenyan native, Barack Obama Sr. was a British subject whose citizenship status was governed by The British Nationality Act of 1948. That same act governed the status of Obama Sr.‘s children.

Natural-born citizens are those born in the country, of parents who are citizens. 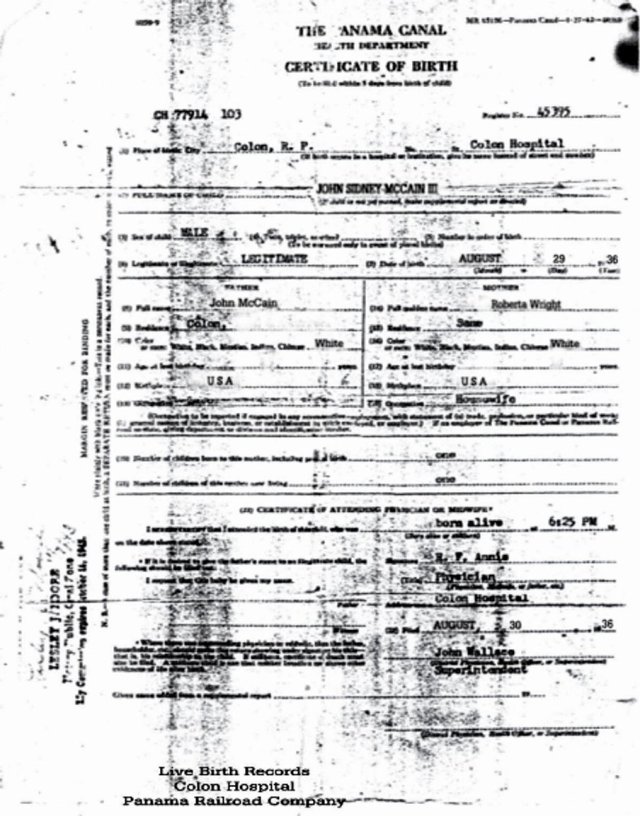 So given that, I repeat my question:
Speaker Pelosi, How Did the DNC “Certify” Obama’s Eligibility?

Would Pelosi lie?
Why would she ever do that?
“Son of this soil”.

UPDATE:  Pelosi and Obama share a tender moment after Obama supposedly signed Obamcare into law and handed Nancy one of the signing pens… 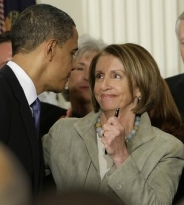 … except it’s not really law, because Obama is not Constitutionally eligible to hold the office of President, so his signature on that bill means nothing.

Certificate of Nomination Summary
By butterdezillion

Six and a half years after publishing this post, I have had it brought to my attention that John McCain IS eligible in the eyes of Vattel since he was “born in the armies of the state”.

I looked that up, and I believe they are correct.

For the same reasons also, children born out of the country, in the armies of the state, or in the house of its minister at a foreign court, are reputed born in the country; for a citizen who is absent with his family, on the service of the state, but still dependent on it, and subject to its jurisdiction, cannot be considered as having quitted its territory.

This entry was posted in Presidential Eligibility. Bookmark the permalink.

34 Responses to OK, Speaker Pelosi, How Did the DNC Certify Obama’s Eligibility?