God, Moses, Crosses and the Bible in Our Capitol Building

Posted on August 7, 2008 by itooktheredpill

This could be the most important post I have ever made…

While just government protects all in their religious rights, true religion affords to government its surest support.

Doesn’t sound like “separation of church and state”,
now does it?

Sounds more like “support, by church, of state“,
or “support of state by church“.

The phrase “separation of church and state” is not in our Constitution. [But it is in the 1936 Constitution of the Union of Soviet Socialist Republics (U.S.S.R.)]  Our founders did not believe in keeping religion out of our government.  Quite to the contrary, our first President said that the “surest support” of our government is true religion.

It is impossible to rightly govern the world without God and the Bible.

Those who push for “separation of church and state” are actively trying to remove from our government “its surest support”.

In our Capitol building, there are countless reminders of this Republic’s history as a Judeo-Christian nation (that protects all in their religious rights).

That’s a truth that the “Secular Progressives” don’t want you to know. They can’t handle the truth, so they try to silence those who speak it.

The words “God” and “Moses” are both prominently displayed in the US House of Representatives.

If all you have ever seen of the US House of Representatives is from C-SPAN, you probably don’t know that above the head of the Speaker of the House, just above the American flag, are the words “IN GOD WE TRUST”: 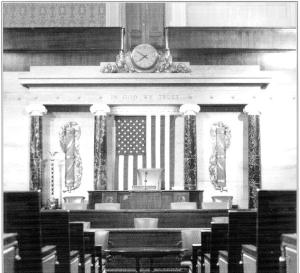 Thank God that image is printed on the cover of a brochure (paid for with our tax dollars) about the House chamber. That brochure was printed when J. Dennis Hastert was Speaker of the House. I doubt that Nancy Pelosi would allow such a picture if the brochure had been printed during her “reign”. I hear that there is a replica of the House of Representatives in the Capitol Visitor Center, but that the words “In God We Trust” have been intentionally left out by the Secular Progressives (Secular = Godless, Progressive = Marxist) who don’t want the public to know the truth. I suspect that Secular Progressives (Godless Marxists) intend for this new “secure public environment” at the Visitor Center to be all that tourists ever see. Once the visitor’s center is complete, they’ll probably try to say that tourists can’t go in the actual Capitol building “for security reasons”. The Godless Marxists can’t handle the truth, so they don’t want tourists to see the truth in the Capitol building. They want tourists to only see a visitor center which has been “sanitized” of any Judeo-Christian imagery.

Now, returning to the actual House of Representatives…If you are standing under “In God We Trust” and turn around 180 degrees, do you know what you (and the Speaker of the House) see up in the gallery?

Moses. Carved in stone. And with his name underneath.

Because our Republic was founded on the Bible and the Ten Commandments. Our founders were influenced by others whose images are also carved in stone along the gallery, but the only face that is a full headshot and not a profile…the only face that looks directly at the Speaker of the House, is…Moses.

I would have taken a picture of it had I been allowed to do so, but the “House rules” prohibited me from bringing a camera into the House Chamber. With a bit of searching, I found this link(*) with a picture: 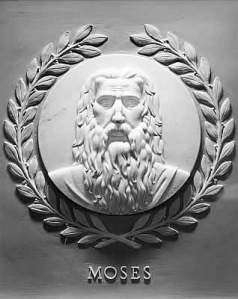 Now, if the members of our government who built this chamber, and met for the first time in it on December 16, 1857, truly believed in a “Separation of Church and State”, then why did they design this chamber with “In God We Trust” in it?

And if the members of our government who remodeled this chamber in 1949-1950 truly believed in a “Separation of Church and State”, then why did they make Moses the focal point of the “lawgivers” – the twenty-three marble relief portraits depicting historical figures noted for their work in establishing the principles that underlie American law.

For those who don’t know, Moses is the man who brought God’s Ten Commandments down Mount Sinai to the people.  There is significant archaeological evidence that modern day Jabal al-Lawz in northwest Saudi Arabia is in fact the Biblical Mount Sinai.  Since a picture is worth a thousand words, I recommend you order and watch this video, which is worth a million words.

The fact is, they did NOT believe in a “Separation of Church and State”. The First Amendment does not even contain the words Separation, Church, or State.

The founders restricted Congress from establishing (founding, owning, and operating) a Religion (like the government in England had previously done with the state-run Church of England).

The founders never restricted Congress from endorsing (promoting) a Religion. There are endorsements of Christianity all over our Capitol building. Many of the paintings, statues, and doors contain a Bible or a cross in them.

How about the chapel…whose stained glass window shows one of many Bible verses behind our National Motto “In God We Trust“. 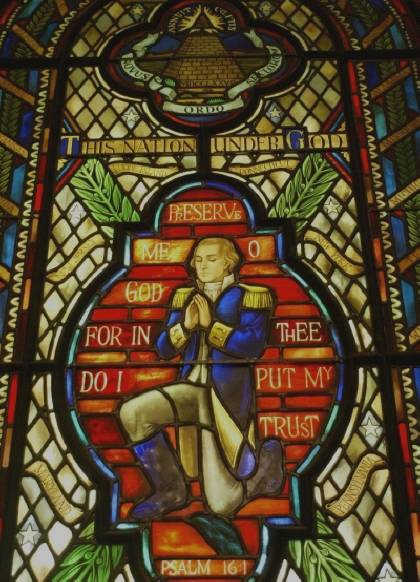 If our founders believed in “Separation of Church and State”, then why did they build a chapel into our Capitol building?

Of all the dispositions and habits which lead to political prosperity, religion and morality are indispensable supports. In vain would that man claim the tribute of patriotism who should labor to subvert these great pillars of human happiness, these firmest props of the duties of man and citizens. The mere politician, equally with the pious man, ought to respect and to cherish them. A volume could not trace all their connexions with private and public felicity. Let it simply be asked, Where is the security for property, for reputation, for life, if the sense of religious obligation desert the oaths, which are the instruments of investigation in Courts of Justice?
And let us with caution indulge the supposition that morality can be maintained without religion. Whatever may be conceded to the influence of refined education on minds of peculiar structure, reason and experience both forbid us to expect that national morality can prevail in exclusion of religious principle. It is substantially true, that virtue or morality is a necessary spring of popular government. The rule, indeed, extends with more or less force to every species of free government. Who, that is a sincere friend to it, can look with indifference upon attempts to shake the foundation of the fabric?

If the Godless Marxists (a.k.a. Secular Progressives) succeed in separating church and state, our Republic would cease to exist.

A Few Declarations of Founding Fathers and Early Statesmen on Jesus, Christianity, and the Bible.

Some, like Dan Riehl, like to make hay about “What Washington didn’t say about God and the Bible“. Let them go back and read the multitude of primary source documents that clearly show how the overwhelming majority of our founders based both their lives and founding of this country upon the Bible.

32 Responses to God, Moses, Crosses and the Bible in Our Capitol Building